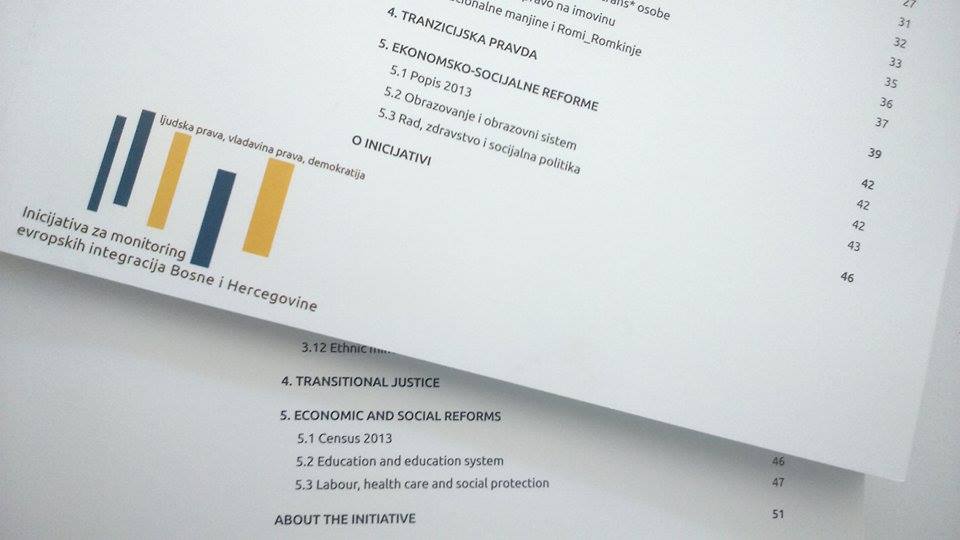 Legal framework
The social security system in BiH includes: the social insurance, the social benefits, the family and children’s protection and the veterans’ protection. These rights are the exclusive jurisdiction of the entities/cantons and Brčko District. Depending on the place of their residence, the BiH citizens, hence, are treated differently in regards to the realizing of the right to social protection. In the previous period no significant progress has been made regarding the easing of the position of the poor and socially vulnerable, nor towards the equalizing of the social rights in the entire state.

The payment of benefits related to social protection is regulated differently in the entities/cantons. E.g. the amount of financial assistance in Republika Srpska is prescribed by the RS Law on social protection, while this is decided at the cantonal level in the Federation of BiH. For this reason there are differences in the amounts of the financial assistance which is provided to the system users, not only between the two entities, but also between the cantons in the Federation of BiH. Regarding the civilian war victims and people with disabilities not related to the armed conflict, this problem has been solved in 2006 through the amendments to the Law on Basics of Social Protection, Protection of Civilian Victims of War and Protection of Families with Children of FBiH, which proposes a transfer of the budget for the social protection of these categories of users from the cantonal level to the level of Federation of BiH. Still, this is not the case regarding the other categories of users of social protection.

The right to health in BiH is ensured through the system of social protection and health
insurance, and its realization and regulation is the responsibility of the entity and cantonal
levels of government. The system of health protection is divided and fragmented, considering that both the entity and cantonal ministries of health and the health funds act in the Federation of BiH, Republika Srpska has a single ministry of health and a single fund of health insurance, while Brčko District has its own separate fund. Such structure creates and additional problem, due to the lack of the harmonization of the legal provisions (in particular between the cantons), and due to the discrimination of citizens based on the place of their residence and the opportunity to use the services of the health protection. This raises the question about the principle of availability of health services to all the citizens indiscriminately, considering that an individual insured in one canton cannot exercise their rights in another canton or entity.

Current situation
After some of the demands stated at the February 2014 protests were formally adopted by
the federal and cantonal governments, in the last year nothing has been done to implement
them, apart from the sporadic moves of abolishing the so-called “white bread” (the privilege of the officials to maintain their income up to a year following their steeping down from a function). Workers’ rights are still violated to a great extent, the witness of which can be the numerous examples of workers’ protests such as the Banja Luka “Kosmos” workers, who have not received a salary in a year; and the disturbing protest march of the workers of the factories in Tuzla: Aida, Konjuh, Dita and the Tuzla Steel Foundry, from Tuzla to the border with Croatia. The Tuzla factory workers decided to do so in late 2014, when it became obvious that the new cantonal government, formed after the February protests, would not s solve the accumulated problems of these companies. It is clear that the problems caused by the crimes related to privatization still are not solved, and that those responsible for the mismanagement of contracts, drawing the capital from the privatized companies and their intentional destruction are not prosecuted. Apart from these cases, there are increasing accounts of the non-compliance with the workplace safety regulations, the lack of adequate equipment and labour conditions, exposing the workers to life hazards, as was the case with the tragic death of the miners in Raspotočje (Zenica) in September 2014 and in the surface mine Dubrave (Tuzla) in February 2015, as well as the deadly outcomes at construction sites in the Sarajevo Canton. No one appeared before the court for these accidents either.

The effects of the catastrophic floods which hit Bosnia and Herzegovina in May 2014 should
be added to the situation we already described. Thousands of people once more faced the
enormous damage to their households, people lose jobs every day, and people in some areas still lack access to the basic infrastructure. It is particularly worrisome that the effects of the last year’s floods were felt strongest by women. Women property owners and farmers suffered the greatest losses and damages, given that about 27% of houses in the Federation of BiH and almost 40% in Republika Srpska are registered to women, and considering the fact that a greater number of women than men works in agriculture.39 This farms were often the only source of income for the entire family, thus it is necessary to determine equal criteria for the restitution if the affected households.

A report on the consequences of floods has been published in Republika Srpska, but the
measures taken for the reparations of damage are far from enough. In the Federation of BiH there are still no official documents on the consequences of the floods, or on the steps taken in order to re-build them. In 2014, a “Compact on Growth and Jobs”, which served as a basis for the Statement signed by the members of Presidency of BiH, with the support of the political parties; and it also served for the creation of the business atmosphere in BiH, that is, measures such as the lowering of income tax; as well as the creation of the Reform Agenda signed by the BiH Government and the BiH Council of Ministers (see 1.2 Parliaments and governments).

In these documents, at least those available to the public, the emphasis is on creation
of a positive business atmosphere in BiH, that is on measures such as the lowering of the
income taxation; increasing the openness and competitiveness of the labour market; reducing the demands and time needed for starting a business; adopting the improved bankruptcy framework for the accelerated re-structuring of the company; the creation of public and transparent e-registers and procedures for obtaining permits, etc. On the other hand, little or no attention has been paid to the measures for the improvement and protection of labour rights, and on the procedures regarding the privatization crime, which is worrisome bearing in mind the already critical state of the area.

Although the acceptance of the Compact and the signing of a joint Statement on the Accession Principles of Bosnia and Herzegovina to the European Union has brought BiH the chance to move from the standstill regarding the European integration; the Compact itself and the solutions drafted in it, as well as the manner of creation and adoption of the reform agenda, are a subject of criticism of a part of the BiH society, in particular of the worker’s unions and movements/organizations whose main focus is on the worker’s rights.
One of such examples is the first item of the Compact which focuses on the lowering of
labour tax burdens. The text of the Compact states that the tax burdens to the salary are high, or that the employer, if they want to pay the salary to the potential worker, has to pay almost 40 percent of the amount in different taxes and contributions which is considered to be a significant factor creating an obstacle for employing. That is the reason why the employers shy away from employing new workers or why they are employing unreported workers, which contributes to the increase of the gray economy, and disables them from exercising their social benefits and workers rights (exercising the rights to retirement and health insurance).

The procedure for the amendments to the legislations which would reduce the personal income tax and contribution rates has been started in Republika Srpska, and it is assumed (according to the proponents of amendments to the law) that it will cause the decrease in tax revenues by 72.3 million (assets of the Pension Fund will be decreased by 13.4 million, the Fund for Health Insurance will be decreased by 43.3 million, the Fund for Child Protection by 4.5 million and assets of the Employment Bureau will be decreased by 11.1 million KM).40 The idea of the proponents is that the lost funds could be compensated by increasing the rate of value added tax (VAT), which would require amendments to the VAT Law at the state level, for which there has not been enough support in the previous years in the BiH Parliamentary Assembly. Apart from the fact that the feasibility and applicability of such reforms is questionable, there is also the problem of their effectiveness and justification. It is worrying that such reforms are announced without
conducting a thorough economic study and without the public debate in which the professional community, the representatives of the workers and the civil society would be included, since the professional opinions on the functionality of this fiscal reform are quite varied. The lack of transparency and inclusiveness throughout the entire process makes room for concerns regarding the direction of the reform in the area of social protection and retirement insurance. Although it has been announced that the reform will proceed in the direction of reducing the number of preferential pensions and the better targeting of the social assistance, in order for it to reach those who really are in the state of need, the lack of concrete information on the manner these issues were treated in the reform agenda and the exclusion of the public and the interested parties from the entire process is worrying. A particular problem is the fact that the ruling parties have a strong foothold and a large number of base voters, in particular in the categories of privileged users of social assistance, and it is questionable whether the reform will actually proceed towards the abolishing of privilege and enforcement of equal rights, based on the actual needs.
Due to a series of factors such as the catastrophic floods, the economic crisis, the high percentage of the unemployed, especially the long-term unemployed, inequality regarding the realization of rights, and political interests, if there is a lack of serious and quality application of adequate social and economic reforms, we can expect that the poverty and exclusion rates will continue to rise, which could be a cause for serious shocks of the BiH society.

• Harmonise the rights in the area of social protection at all levels, and to equalize the levels of benefits stemming from exercising these rights;
• Ensure that a minimum of social protection on the entire territory of BiH (cantons/entities/Brčko District) is not below the poverty line;
• Adopt uniform legislations (or harmonize the existing ones) across the country in order to ensure health care for all individuals regardless of their status in terms of insurance;
• Adopt a uniform law concerning the rights of patients (or harmonize the existing ones) across the country which would allow all the patients to have an equal and dignified treatment with full respect for their rights.

This article is part of Alternative Progress Report 2015: political criteria.