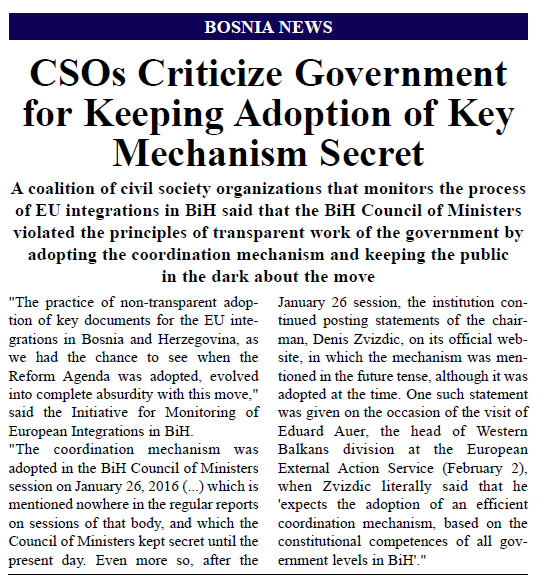 “The practice of non-transparent adoption of key documents for the EU integrations in Bosnia and Herzegovina, as we had the chance to see when the Reform Agenda was adopted, evolved into complete absurdity with this move,” said the Initiative for Monitoring of European Integrations in BiH.

“The coordination mechanism was adopted in the BiH Council of Ministers session on January 26, 2016 (…) which is mentioned nowhere in the regular reports on sessions of that body, and which the Council of Ministers kept secret until the present day. Even more so, after the January 26 session, the institution continued posting statements of the chairman, Denis Zvizdic, on its official website, in which the mechanism was mentioned in the future tense, although it was adopted at the time. One such statement was given on the occasion of the visit of Eduard Auer, the head of Western Balkans division at the European External Action Service (February 2), when Zvizdic literally said that he ‘expects the adoption of an efficient coordination mechanism, based on the constitutional competences of all government levels in BiH’.”