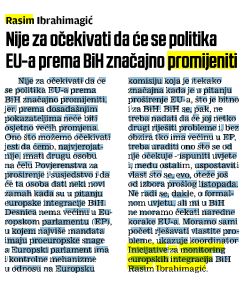 We can not expect that the EU policy towards Bosnia and Herzegovina will change significantly, but what we can expect is the new person to serve as the European Commissioner for European Neighbourhood and Enlargement Negotiations who should give a new perspective to the European integration in BiH. Far-right does not have the majority in the European Parliament, which has control mechanisms in regards to the European Commission, and that is significant when it comes to the enlargement of the EU and Bosnia and Herzegovina as well. But BiH cannot expect that someone else will solve its issues regardless of who wins the majority in the European Parliament.