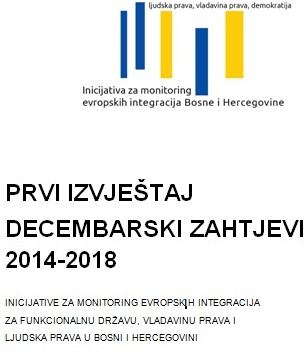 In the report before you we present the assessment of the work of the government institutions and the barers of government functions, in terms of the set goals, during the first year of the mandate, from December 2014 to December 2015.

The Initiative for Monitoring the EU Integration of BiH is an informal NGO coalition which produced a list of specific priority demands to be met by the government actors at all levels over the course of the next four years. The focus is on the functioning of the state, the rule of law and human rights in BiH.

In addition to the general assessment we also reflect on the positive and negative developments in the context of each  individual demand. The assessment ranges from met, partially met, and not met.

Recalling the assessment of the effectiveness of government work from the Alternative Progress Report BiH 2015 from the first quarter of the year, we reflected on the grave breaches of human rights, lack of processing of corruption cases, suppression of the Civil Society Organizations’ work, infringement on the freedom of the media, lack of transparency and inefficacy of the state apparatus, lack of human rights protection for marginalized groups, widespread discrimination and violence, then it is not surprising that this report contains a high number of unmet demands.

We express our concern that the current government is oriented towards short-term gains, and that it is insufficiently focused on democratic governance which should reflect the rule of law and sustainable development.

The Constitutions still contain discriminatory provisions which relate to ethnic/national belonging and it is uncertain that Sejdic-Finci and Zornic judgments will be implemented as predicted by the Council of Ministers BiH Action Plan. Although a lot was said about the need to establish mechanisms of coordination between different levels of government in order to implement the requirements set out in the SSP, it hasn’t been done yet and a transparent process of discussion on constitutional reform has  not been established by the bodies in charge, instead, communication is reduced to informal channels.

Aware of the normative vagueness in the regulation of the work of the Constitutional Court the members of the Initiative determined as one of the priorities the Passage of the Law on the Constitutional court which would strengthen the independence of the Court and tackle some of the issues, therefore making the work of this institution more efficient, which has not been discussed, but the existence of the Court, its jurisdiction and the election of judges are being questioned which is damaging to the justice system of BiH.

Of particular concern is the fact that there were no activities directed at the improvement of the current state of affairs in the areas covered by the Agreement made between the Civil Society Organizations and the Council of Ministers BiH, rather, there is regress in the area of freedom of expression, assembly and organization because the issue of the freedom of access to information has not been resolved, the breaches of rights to freedom of expression of journalists have not been halted and the appointments to the Regulatory Agency for Communications have not been depoliticized.

There have, however, also been some positive changes during the reporting period:

The Civil Society Organizations in the Initiation for the monitoring of the European Integration BiH will continue to follow the work of the government actors both individually and jointly, in line with their advocacy and research activities, and they will advocate the fulfillment of the demands with the goal of advancing the state of human rights and the rule of law.

We believe that this report as well its predecessors  and the reports to follow, which outline the progress in satisfying the accession and pre-accession criteria, will serve as a guide to the government, but also to the European Commission, because Bosnia and Herzegovina has to strive towards sustainable reforms.

The full Report is available on b/h/s language HERE.