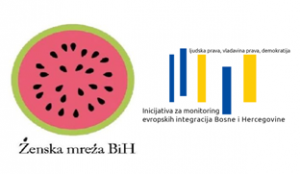 The Initiative for the monitoring of EU Integration of Bosnia and Herzegovina and Women’s Network, warns:

In forming the new Government of Republika Srpska half of BiH citizens were ignored!

When you form the new government of the Federation of BiH and the Council of Ministers do not violate the Law on Gender Equality!

By confirming the new Government of the Republika Srpska last Wednesday we have executive power in one of the two entities. At the head of this government remains Željka Cvijanović. Unfortunately, when we talk about the number of female Ministers, we still have no progress. On the contrary. And while we had five female ministers in the last mandate, in this new government there are only three.

The Law on Gender Equality, in its Article 20, as well as international documents, signed by Bosnia and Herzegovina, provide for equal gender representation as a mandatory norm. There must be at least 40% of the under-represented sex, for true equality.

We call all institutions that are responsible for the implementation of the Law on Gender Equality – the Agency for Gender Equality, Gender Centre FBiH and RS Gender Centre – to publicly respond to this breach and to do everything so this will not happen again in the forming of the Government of the Federation and the Council of Ministers. We invite political parties involved in the formation of the government of the Federation and the State to take into account when appointing its staff. Equal representation of both sexes is not something that can be discussed!

The Initiative for the monitoring of EU Integration of Bosnia and Herzegovina (www.eu-monitoring.ba)