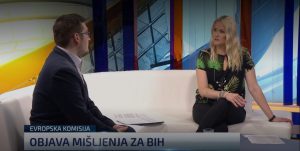 Around 500 million citizens of the EU countries elected new representatives in the European Parliament. Newly elected parliamentarians, 751 of them, will open discussion on forming parliamentary groups. Rasim Ibrahimagić, from the Initiative for Monitoring the European Integration of BiH, commented on the elections. According to Rasim, Bosnia and Herzegovina needs to fulfill all the conditions which EU set in front of it, such as forming the government because, without it, we cannot start reform processes.