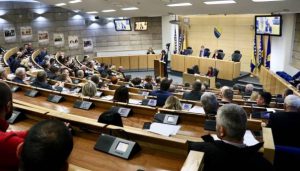 Rasim Ibrahimagić spoke on behalf of the Initiative for Monitoring the European Integration of BiH, stating that the Constitution explicitly provides that delegates for the FBiH’s House of Peoples must be elected from the cantonal assemblies. According to the criteria of the Central Election Commission (CEC), mandates are awarded to the persons who are not delegates in cantonal assemblies, which is contrary to the FBiH’s Constitution. He called upon all actively legitimized to initiate the process of assessing the constitutionality of this decision. The Croat People’s Assembly (CPA) reacted to the CEC’s decision as well by demanding to withdraw the decision because it violates the Constitution of FBiH.