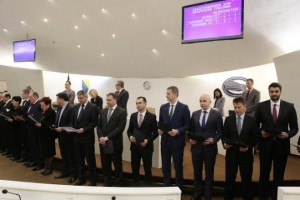 Women are traditionally underrepresented gender when it comes to the executive branch of government, that is, governments in Bosnia and Herzegovina. Representation of women in legislative bodies, despite being below the satisfactory level,  is still better than the representation of women in governments which are appointed by these legislative bodies. The absence of women in governments, who in the political system of Bosnia and Herzegovina have significant (if not the most significant) influence on decision-making processes, has been quite an issue for years, and nonetheless, mechanisms for improving the situation have not been established yet.

Demands that all forms and levels of government be representative in regards to the structure of the electorate are legitimate. The citizens expect that all the groups in society, whether they have in common certain characteristic such as ethnicity, skin color, race, gender, or geographic origin, have influence in decision-making processes. In the context of gender equality, expectation of representation refers to the concept of critical mass which implies that there is an adequate (critical) number of women in decision-making positions that would be able to represent interests of women as a group.

The concept of critical mass first emerged in the context of female representation as the traditionally underrepresented gender groups in the legislative bodies. The concept is based on the assumption that as the number of women in the legislative bodies increases, they will be in better position to form strategic coalitions with one another. Even though the concept has been challenged by numerous authors including Drude Dahlrup, who is one of the origniators of the concept, expectations of equal representation of women and men in all processes of key social decision-making has become one of the prime focuses of all organizations.

The first document that globally addressed the concept of critical mass is the Beijing Declaration and Platform for Action which determined global objective of 30% of women in decision-making positions. The Law on Changes and Amendments to the Law on Gender Equality in Bosnia and Herzegovina from 2009 determined an even more ambitious objective of 40%, which is also the objective determined at the level of the Council of Europe in the Recommendation Rec(2003)3 of the Committee of Ministers.

Finally, in accordance with the Beijing Declaration and the Recommendation Rec (2003)3 of the Committee of Ministers of the Council of Europe, paragraph (4) defines obligations of all the government bodies that „in order to attain equal representation of genders and eliminate discrimination they are obliged to implement special measures required by Article 8 of the Law.“

Special measures in accordance with Article 8 of the Law, and also in accordance with all  international sources of human rights, are temporarily introduced in order to attain actual (de facto) gender equality and are not considered to be discrimination. They refer to all the norms, criteria and practices that can be impartially justified by a legitimate objective, and that must be proportional, adequate and necessary. Given that the key obligations of the government, according to the Law on Gender Equality in Bosnia and Herzegovina, refer to ensuring and attaining equal representation of genders of 40% least, that is, introducing special measures in case of underrepresentation of male or female genders, the 40% from Article 20 is an objective, and not a quota.

Nonetheless, regarding the organization of electoral systems in the world, quotas are one of the most common means of attaining a larger number of women in legislative bodies. The Inter-Parliamentary Union estimates that more than 80 countries in the world have some form of quotas in their electoral system. Bosnia and Herzegovina is one of those countries. The Election Law of Bosnia and Herzegovina determined a 40% quota for the candidate lists which can be considered as a special measure in accordance with Article 8 of the Law on Gender Equality in Bosnia and Herzegovina. In reference to the objective of quotas, the quota from the Election Law of B&H also determines the exact number of the lesser represented gender which political parties must propose following precisely defined order on each candidate list in order for the list to be authorized by the Central Election Commission. Following this line of definition, the quota from the Election Law of B&H is one of the most complete quotas in comparative law.

In comparison to the provisions that determine a specific objective and require some form of action in order to attain that objective, quotas categorically require realization of a specific percentage. Thus, it is important, when considering the fulfillment of the requirement from Article 20 , that the government institutions determine which method is the most adequate for attaining equal representation, and that neither necessarily includes the obligation of determining a quota, nor it excludes implementation of a quota as a special measure for attaning the 40% objective.

Without the provisions in laws that regulate the composition of governments and that introduce special measures for attaning equal representation of women and men, only the quota from the Election Law of B&H could be perceived as a special measure that should indirectly influence the composition of governments. It should be perceived as such particularly because legislative bodies appoint governments, that is, confirm their composition, thus, it should be expected that women representatives in those legislative bodies would require that the composition of governments take into consideration the objective from the Law on Gender Equality in Bosnia and Herzegovina. This approach has been largely accepted in other countries at least when provisions that regulate appointment of goverments are concerned.

If we return to the concept of critical mass, which is vital for a specific group to form a common platform for action and genuinely influence decision-making processes, we may conclude that with the current underrepresentation of women in the legislative bodies in B&H it is unlikely for this indirect method to have any influence on the composition of governments.

Therefore, demands for regulating equal representation of men and women in the composition of governments through the determination of quotas can be considered legitimate. This method would most certainly ensure the attainment of the objective from Article 20 of the Law, as well as other international documents that determine objectives in this field.

At the same time, it is important to stress that none of the international documents neither determined the obligation nor recommended implementation of quotas for the composition of governments. The focus of these documents still remains the achievement of equal opportunities for women and men in the field of the active and passive right to vote, and thus, quotas are suggested as a potential measure for achieving this right. Thus for instance, the United Nations Committee on the Elimination of Discrimination against Women in the Concluding observations on the combined fourth and fifth periodic report of Bosnia and Herzegovina made a cautious recommendation that Bosnia and Herzegovina should „introduce procedures to ensure efficient implementation of Article 20 of the Law on Gender Equality… through the use of temporary special measures where relevant.“

If Bosnia and Herzegovina would opt for the implementation of quotas as the temporary special measure for attaining equal representation in accordance with Article 20, it is very likely that the United Nations Committee on the Elimination of Discrimination against Women would commend it as significant step forward. This way Bosnia and Herzegovina would probably become the first member country of the United Nations that have opted for the implementation of a legal quota for attaining equal representation of women and men in governments.

Quotas as temporary measures for appointing are already present in the legal system of Bosnia and Herzegovina. Quota as a special measure for attaining the objective from Article 20 of the Law has been implemented for the appointment of collegia of the Houses of the Parliamentary Assembly of B&H. Although this quota refers to the composition of collegia within the legislative body, it can be perceived as an analogous model for future solutions for appointing governments, having in mind that the collegium, just like government, is appointed by the legislative body. The amendments to rules of procedure of both Houses determined that the composition of collegium shall endeavor to ensure representation of both genders. Although it is clear that this is a flexible quota, partial success is evident given that one woman representative was appointed in the composition of the first collegium of the House of Representatives of the Parliamentary Assembly of Bosnia and Herzegovina. At the same time, no women representative was appointed in the composition of the House of Peoples, even though political parties that form the opposition had two women delegates in their ranks.

When it comes to appointing multi-member bodies, the situation is analogous with the provisions of the Election Law that define composition of the election commissions. Article 2.14 determined that the composition of the election commission would, in general, reflect equal representation of genders, and it also confirmed the 40% threshold. The appointment of lower levels of government is supervised by the Central Election Commission which is obliged to invalidate the selection of  commission members which does not fulfill this requirement. Even though the Central Election Commission does not disclose results regularly, data from 2011 have shown that the number of women appointed to the municipal election commissions was 41,22%, out of which 29,93% were women appointed as presidents of the municipal election commissions.

Are quotas for the lesser represented gender an optimal solution for the regulations that regulate the appointment of governments?

There is no simple answer to this question. The implementation of quotas for appointing  governments is a very controversial issue in most countries. However, this model of quotas does not seem to be in conflict with the international standards in the field of human rights, unless it explicitly excludes specific groups. Quotas for the lesser represented gender would fulfill this requirement since they aim at the inclusion of both women and men.

In the constitutional and political system of Bosnia and Herzegovina quotas are most commonly employed mechanism for ensuring representation of groups in society, specifically stressing the constituent peoples. It is unclear whether there is political will for the introduction of these measures, although, based on the analysis of the two aforementioned examples, it may be concluded that quotas for the lesser represented gender are already present.

„Would quotas contribute to the attainment of the main objective of representation which is advocating interests of groups in society?“ is the question impossible to answer. The quotas would directly contribute to the increase of women participating in decision-making positions and to the change of the traditional attitude concerning the role of women in public and political life. Over time the change of attitude would certainly contribute to the greater sense of responsibility of the appointed women members of governments to start representing both, their electoral body and interests of women as a group.

In order for this change to take place as soon as possible, it is quite clear that quotas, as an option, should not remain the only measure for attaining objectives of representation. The public pressure directed at political parties to nominate equal number of women and men into the composition of government, as well as the pressure towards political parties to include in their action topics on gender equality will always be necessary. Even when the number of women and men in governments is equated, that still does not imply that female and male ministers will be able to adequately respond to the demands concerning gender equality. This change will take place only when political parties recognize that there are spheres in which women and men are not equal, and when they start acting upon it through their elected or appointed representatives in order to create institutional responses and ensure legitimate gender equality.

Increasing the number of women in governments would certainly contribute to these objectives, but it is essential to have the public continually informed about the changes that women bring into politics.

The Initiative for Monitoring the European Integration of BiH