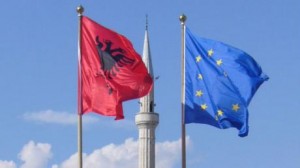 Albania has legally acquired the status of candidate for EU membership, Bosnia and Herzegovina on that way stagnates.

The heads of diplomacy of the European Union have agreed to give Albania the candidate status for EU membership. This decision is left to be confirmed by the Heads of State or Government at the meeting in Brussels.

The fact is that BiH is the only country in the region, along with Kosovo, that has not acquired the status of candidate for EU accession. BiH failed to persevere in resolving two key issues and conditions for it to be included in the process of candidacy for EU accession – that being the ensuring of the implementation of the Sejdic-Finci verdict issued by the European Court of Human Rights in and the establishment of mechanisms for the coordination of relations with EU.

Albania’s path of accession to membership was not easy. Internal political stalemate and the slow process of implementing the reforms were fundamental problems with which Albania met. Opinions were divided but one thing is certain – Bosnia and Herzegovina has not proved to be a functional state, and there is no will of the competent authorities to address these issues that are the future of all citizens of this country.

Montenegro is also in negotiations with the EU and has allready opened three new chapters – free movement of capital, financial supervision and external security and defense policy.

Serbia is getting near to opening of the first chapters, and Croatia is a full member of the EU since 2013.

In a statement to the news agency Patria, Igor Davidovi, Head of Mission of BiH to the EU in Brussels, stated that this year Bosnia and Herzegovina has not made any breakthrough in negotiations with the EU, reason being the upcoming general elections in BiH, as well as holding elections for the European Parliament. He also noted that the European Commission has not given up on the objectives defined in the roadmap, and that the development of the situation, when the relationship between BiH and the EU is in question, is expected in the second quarter of 2014, when it will be known who will be partners from BiH and the EU and who will continue to lead European Affairs on when it comes to BiH.