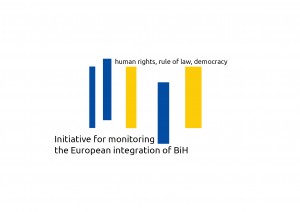 Initiative for the monitoring of European integration of Bosnia and Herzegovina has published the second Alternative Report on the progress of Bosnia and Herzegovina in the process of EU integration. The report, which production was coordinated by Sarajevo Open Centre as a coordinating member of the Initiative, is a joint effort of dozens of individuals and organizations in an endeavor to depict the current situation in the country from the perspective of the civil society organizations and it serves as an alternative to the official Progress Report that EU is publishing in October of each year.

The focus of the report is on the following areas: human rights, functionality of the state, the rule and corruption, and transitional justice, which are the political criteria of EU Integration. The spokesmen on the presentation of the report Sasa Gavrić (Sarajevo Open Centre), Fedra Idžaković (Rights for All), Tijana Cvjetićanin (Why not?) and moderator Damir Banović (Centre for Political Studies), concluded that no relevant progress has been achieved during the 2013 and 2014 – Sejdic-Finci ruling has not yet been implemented, the work of institutions is characterized by instability, inefficiency and lack of transparency, the decisions of the constitutional courts are still not implemented, nor does the Structured Dialogue on Justice between BiH and EU shows any progress and judicial reform is stopped. Likewise, minorities and vulnerable groups continue to suffer due to the discrimination and violence, and the Law Against Discrimination did not show the expected results.

However, the Initiative expresses hope that the general elections in October of 2014 will bring the more stable political structure, ready to face different problems. It was pointed out that the Initiative will certainly advocate for change when it comes to adopting new laws and policies, and the implementation thereof. We also hope that the BiH authorities and the EU institutions will support a stronger representation of civil society within the various forums within the EU integration. Civil society must become the third actor in this process along with the State and EU institutions.

After the presentation, during this week, the Alternative report has been sent to all BiH institutions, as well as to the European Union, and we hope that it will thus affect the formation of an official Progress report that will be published in October.

PDF version of the report in English is available here.