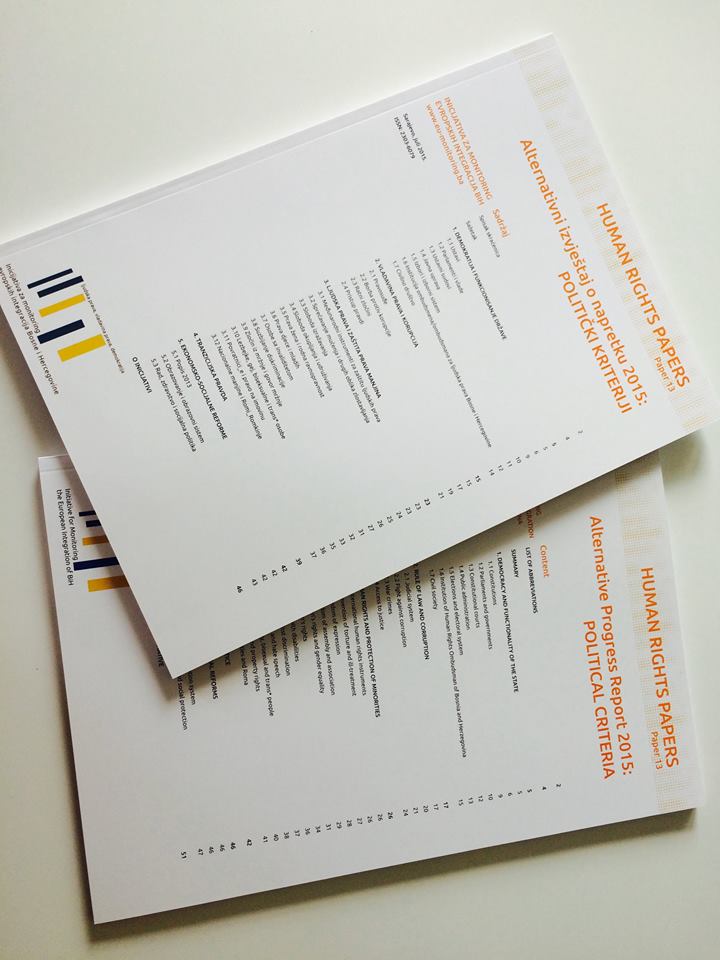 After a series of modifications and amendments, Public Procurement Law of BiH, came into force in May 2014, but its implementation has been delayed by six months, until 28th November 2014. The new law contains solutions that are in line with the SIGMA recommendations and new EU Directives. However, according to the BH experts in this area, the law does not provide the minimum standards for the successful prevention, education and sanctioning of the irresponsible participants in public procurement in BiH, nor does it provide the transparency, competitiveness, efficiency and rationality regarding the public spending of budgetary funds in the public procurement process. The new legislation proposes significant fees for appealing, which is an additional burden on bidders, due to the creation of administrative barriers and high costs for the transparent procedures, and it further undermines the efforts to fight corruption in public procurement. In addition, the fines for the responsible persons in contractual powers are lower than the penalties provided by the previous Public Procurement Law of BiH, which will certainly not raise the level of responsibility. Also, the establishment of new branches of the Office in Banja Luka and Mostar was planned, but they still have not been established.

After the prevention of the adverse amendments to the Freedom of Access to Information Act for BiH (FAIA) in 2013, the BiH Council of Ministers has ordered the appointment of a new working group with the aim of creating amendments to the FAIA, in line with the initiative of the Personal Data Protection Agency in BiH. Although invited to take part in the new working group, the office of Human Rights Ombudsman of BiH have excluded themselves from its operation, since they believe that there is a legal inconsistency due to the fact that the previous working group has never formally stopped working. Currently there are no activities in the direction of making the amendments to the FAIA; however, we can expect new proposals. Meanwhile, the laws at the entity level are not harmonized with the law at the state level, in regards to the sanctions for the violations of the law; thus, at this point, we have the legal framework which is not harmonized at state and entity levels, which is unacceptable.

The existing Law on Financing of Political Parties in BiH, including the amendments to the law from 2012, points out the lack of will of the legislative authorities in BiH to establish control over the expenditures of the political parties, whose main sources of income are public subsidies at all governmental levels in BiH. The Central Election Commission BiH has no clear authority for the audit of expenditures, and focuses mainly on income. The sanctions for the violations of the law had not been amended, i.e. for the potential gains obtained through its use. In addition, the amounts of the voluntary contributions of legal and natural persons have significantly increased, and the sources of financing of the political parties have further expanded (the publishing, credits with commercial banks). Apart from that, in line with the new Book of Rules on Pre-Election and Post-Election Financial Reports of the Political Subjects, the parties are no longer required to include the ID numbers of people and companies who finance them, so all the legal obstacles for the publishing of the sources of income (i.e. the protection of personal data) have been removed. However, it remains to be seen whether CEC will publish these reports in its entirety.

The Law on Conflict of Interest, adopted in 2013, has significantly eroded the legal framework in this area – the responsibility for monitoring the implementation of the law, held previously by the Central Election Commission, was transferred to the jurisdiction of the parliamentary committee the members of which are selected from the members of the Parliamentary Assembly. Such a solution does not provide even the minimal grounds for a transparent and responsible approach in deciding on the potential conflict of interest of the party colleagues of the committee members. In addition, the proposed penalties for the proven conflict of interest are significantly reduced, which further weakens the mechanisms for the prevention of conflicts of interest. The issue of transfer of departments which worked on issues of conflict of interest from the Central Election Commission to the Agency for the Prevention of Corruption and Coordination of the Fight against Corruption in BiH (APIK) still has not been resolved. The issue of systematization and the budget is still controversial, and there are still no satisfactory solutions for the both sides, which allowed that the appointment of staff after the 2014 General Elections passes without the required verification of a potential conflict of interest of the proposed candidates.

Following the adoption of the Law on Protection of Persons Reporting Corruption in the Institutions of BiH, in December 2013, the jurisdiction over the implementation of the law
was given to the Agency for the Prevention of Corruption and Coordination of the Fight against Corruption in BiH (APIK). In the last year, APIK has received 7 requests for granting the status of “whistle-blower”, 2 of which were granted. However, the laws at the entity levels still have not been adopted and due to the administrative structure of BiH, APIK is responsible only for the state level of government. This legal void may lead to the situation that more than one institution will be working on the implementation of the law or that no one will be working on it, thus leaving the “whistle-blowers” without the adequate support.

Before the end of the term of the Strategy for Fight Against Corruption in BiH 2009 – 2014,
APIK has started working on the new Strategy for Fight Against Corruption in BiH for the period 2015-2019, and on the accompanying Action Plan. The text of the Strategy itself has been prepared by the team of international experts in collaboration with the APIK representatives. Another novelty is that, during the work on the Strategy, a working group was formed, made up by a large number of representatives of the institutions, the judicial system, civil society, and the media, which allows a wide range of consultations, and a better quality of the strategic plan. The prepared Action Plan contains realistic and measurable indicators which can be traced during the monitoring of the implementation of the strategic goals. The prepared documents have been forwarded to the BiH Council of Ministers for adoption in December 2014. Due to the fact that the new composition of the BiH Council of Ministers has not been appointed by March 2015, the Strategy and the Action Plan have been placed on the agenda of a session only in May 2015, when they were adopted as well, without any amendments. We are still waiting for the formal start of the activities as proposed in these documents.

In the Federation of BiH, at the very end of the mandate of the previous federal Government, the Confiscation of Assets Law in the FBiH was adopted, and it should have come into force in March 2015, but its implementation was postponed, because the Agency for custody, management and disposition of forfeited assets acquired through criminal offences has not been formed, and it is responsible for the enforcement of the law.8 Considering the crisis of the authorities which occurred less than two months following the formation of the FBiH Government, the implementation of the law is still uncertain.

Recommendations:
• Identify large and complex cases of corruption (especially in the framework of public procurement, privatization and major infrastructure works) which should be a priority solved before judicial institutions;
• Conduct a comprehensive analysis of the situation in the judiciary and law enforcement agencies, which would serve as the basis for further dialogue and as a basis for measuring progress;
• Strengthen mechanisms and independence of internal controls within the Office of Disciplinary Prosecutor of HJPC and within the law enforcement agencies, as well as strengthen human and material resources in the department for organized crime and corruption within the Prosecution;
• Introduce the practice of filing assets declarations for all elected officials, the judiciary and the leaders among law enforcement agencies, and their veracity should be subject to verification.