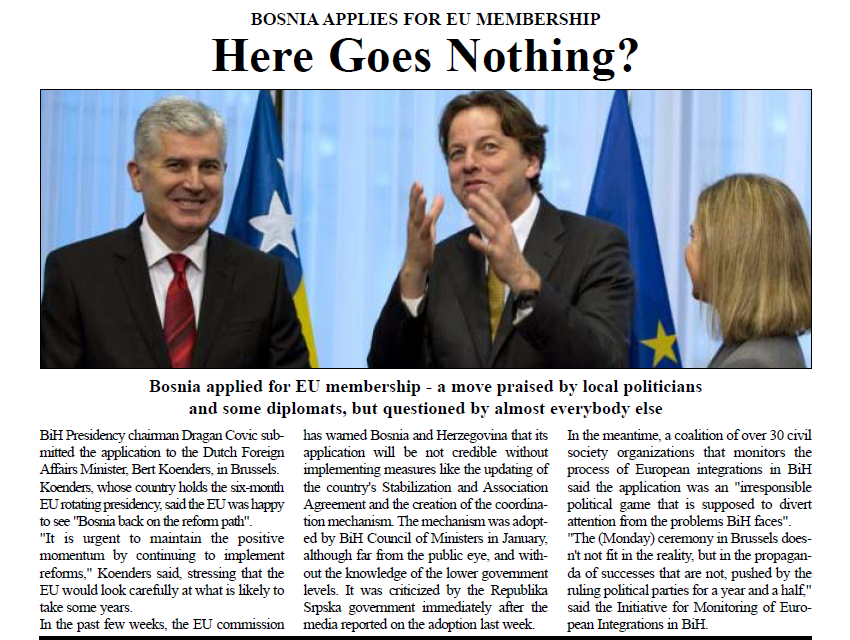 BiH Presidency chairman Dragan Covic submitted the application to the Dutch Foreign Affairs Minister, Bert Koenders, in Brussels. Koenders, whose country holds the six-month EU rotating presidency, said the EU was happy to see “Bosnia back on the reform path”. “It is urgent to maintain the positive momentum by continuing to implement reforms,” Koenders said, stressing that the EU would look carefully at what is likely to take some years.

In the past few weeks, the EU commission has warned Bosnia and Herzegovina that its application will be not credible without implementing measures like the updating of the country’s Stabilization and Association

Agreement and the creation of the coordination mechanism. The mechanism was adopted by BiH Council of Ministers in January, although far from the public eye, and without the knowledge of the lower government levels. It was criticized by the Republika Srpska government immediately after the media reported on the adoption last week.

In the meantime, a coalition of over 30 civil society organizations that monitors the process of European integrations in BiH said the application was an “irresponsible political game that is supposed to divert attention from the problems BiH faces”.

“The (Monday) ceremony in Brussels doesn’t not fit in the reality, but in the propaganda of successes that are not, pushed by the ruling political parties for a year and a half,” said the Initiative for Monitoring of European Integrations in BiH.