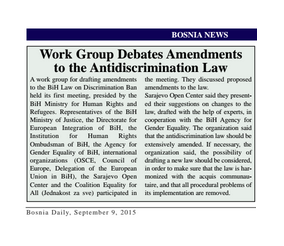 “A work group for drafting amendments to the BiH Law on Discrimination Ban held its first meeting, presided by the BiH Ministry for Human Rights and Refugees. Representatives of the BiH Ministry of Justice, the Directorate for European Integration of BiH, the Institution for Human Rights Ombudsman of BiH, the Agency for Gender Equality of BiH, international organizations (OSCE, Council of Europe, Delegation of the European Union in BiH), the Sarajevo Open Center and the Coalition Equality for All (Jednakost za sve) participated in the meeting. They discussed proposed amendments to the law. Sarajevo Open Center said they presented their suggestions on changes to the law, drafted with the help of experts, in cooperation with the BiH Agency for Gender Equality. The organization said that the antidiscrimination law should be extensively amended. If necessary, the organization said, the possibility of drafting a new law should be considered, in order to make sure that the law is harmonized with the acquis communautaire, and that all procedural problems of its implementation are removed.”