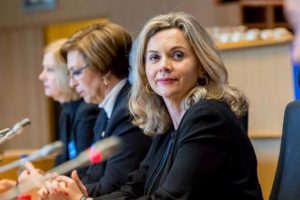 MEP Željana Zovko organized a conference on the topic of “Enlargement of EU to Western Balkans, Youth and Impact of Parliament’s Resolutions-Case of Bosnia and Herzegovina”. The gathering was organized regarding the visit of young people from BiH, and instead of talking about EU integration of BiH, the main subject was Croatian people and their “difficult combat for survival” and the election of Željko Komšić as a member of the Presidency of BiH. Tijana Cvjetićanin reacted in front of Initiative for Monitoring of European Integration by asking Cristian Preda to give his opinion on the implementation of verdicts of European Court of Human Rights in cases of constitutional discrimination which was confirmed repeatedly.