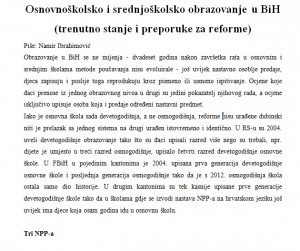 Education in Bosnia and Herzegovina is at a stand still – twenty years after the war, teaching methods in primary and secondary schools have not evolved. Teaching staff continues to teach, students write down and afterwards reproduce through written or oral exams. Grades that students carry from one education level into another are the only indicator of their performance, and students are graded exclusively by the teacher that teaches a particular subject.