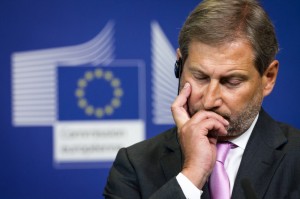 On the occasion of the visit of Johannes Hahn, Commissioner for Neighborhood Policy and Enlargement Negotiation, the Initiative for Monitoring the European Integration of Bosnia and Herzegovina calls:

THE NEW EUROPEAN INITIATIVE MUST BE A TRUTHFUL NEW APPROACH OF THE EUROPEAN UNION TOWARDS BOSNIA AND HERZEGOVINA!

We are witnesses that Bosnia and Herzegovina (BiH) is in a constant blockade in the last eight years. All reform initiatives finished unsuccessfully.

Stefan Füle´s initiative to coordinate the process of the implementation of the Sejdić-Finci ruling in 2013 and at the beginning of 2014 turned into a closed, non-transparent negotiation between party leaders. Institutions in charge, that have been elected by the citizens, and primarily the BiH Parliamentary Assembly, lost their position in this process. The primary negotiation topic – the abolishment of the ethnic discrimination in the BiH political system – has been put aside, and the “dialogue between political party leaders” turned into negotiations about the “Croat issue”. When the failure of the process was declared, nobody was responsible and publicly criticized.

BH citizens expressed their opinion about politicians. The February protests have been a warning; with the General election results, some parties from the entire territory of BiH have been punished.

The German-British, or new European Initiative, the new approach of the European Union and its member states to unblock the accession process, and to put the focus on economic and social issues, beside the political reforms, is a new hope for BiH. But, having in mind the problems from the past, we are calling Commissionaire Johannes Hahn to transform the new initiative into a truthful new approach of the European Union towards BiH. We demand that: