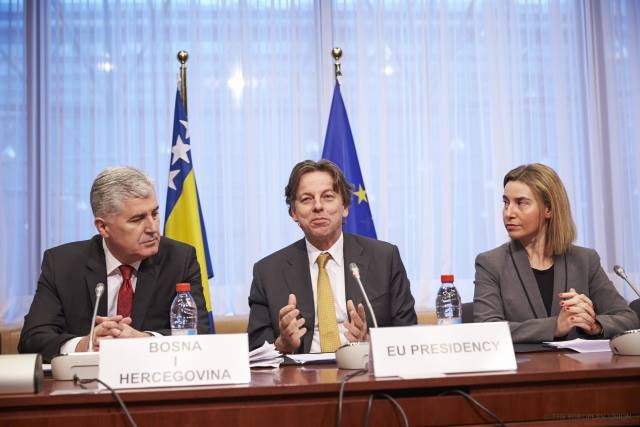 The Initiative for Monitoring the European Integration of BiH welcomes the choice by the coalition at state level of government to apply for the Membership in the EU. However, we do not see the submission of the Application for the Membership in the EU as proof of this intent, but rather as a political play, which aims to distract the public from issues that BiH is facing at the moment. At a time when the state judiciary is under immense pressure from both the media and the politics, when both entities are facing financial collapse and state funds can only cover the public officials’ paychecks, and when the official results of the 2013 Census are still not known (which means we cannot offer even have the most basic information about BiH to the EU), the submission of the Application for Membership can only be seen as excess optimism.

BiH is a state with a large and expensive administration, high unemployment rate and a high rate of corruption, and it does not meet even the minimum criteria for the Membership in the EU. The Constitution is discriminatory as it does not allow equal political participation for all citizens. Local manufacturers and the economy are still not ready to enter the European Market. All these problems reflect on the standard of living and we have to be aware that the Application will not resolve these issues and the government is not doing anything to bring us to European level, which is best demonstrated by stagnation in the field of human rights, violations of which were pointed out by the Initiative in our December Demands.

Therefore the Initiative for Monitoring of the European Integration of BiH considers that today’s ceremony in Brussels does not reflect BiH reality, but is rather propaganda of unachieved success produced by the ruling parties. By subverting the process of EU Integration to their own marketing strategy and by not caring about the negative consequences the submission of the application for mere political purposes will have for the country’s reputation and the process of accession itself, the government, once again, proves that it is more interested in political gains than the State and citizens’ interests.

By submitting the application the ruling coalition is not merely ignoring the reality of our country, but also the statements made by high-ranking officials of the EU who have made it clear that rushing this process is unwise.

Although according to the Agreement on the EU the application can be submitted by every European state which respects values like human dignity, freedom, democracy, equality, rule of law, human rights and minority rights, the officials of the EU have repeated on several occasions that the Application by BiH would be more likely to succeed if the country were to adopt the Coordination Mechanism and change the Stabilization and Association Agreement to the EU in terms of traditional trade. The Coordination Mechanism has been adopted under dubious circumstances and with no public oversight and the SAA talks are only to begin tomorrow. The statements from the top – affirming the application’s credibility – are  therefore unfounded.

But we have to emphasize that we are not surprised by the politicians’ choice to ignore the warnings from Brussels.

The EU policy towards BiH has been too soft in recent times, which is apparent in the constant lowering of the Accession criteria. The question of solving the Sejdić-Finci case, which was once at the top of European priorities has taken a back seat to the Reform Agenda, which the BiH government is using to implement policies they see fit in any given moment. The EU on the other hand has not reacted to numerous legislative procedural breaches, nor to the lack of transparency in the process of adopting the Coordination Mechanism.

Recall, the EU has agreed to the BiH politicians’ games and presented the last Progress Report as positive, although its content clearly indicates that there are only isolated cases of limited progress, and that in the majority of areas BiH is stagnating or even regressing. From the EU Member States BiH is not expecting false optimism of the same kind daily delivered by the government, but rather support on the road of reform, which would actually be beneficial to the BiH citizens.

The Initiative for monitoring of the European Integration of BiH considers that the submission of the Application is an irresponsible gamble with the country’s European future and a way to turn the attention from the issues faced by the Atate. We invite all responsible institutions to prove that their support for Europe is not merely rhetorical and to engage with the remaining issues connected to SAA and the essential Constitutional changes. We cannot forget that the eventual acceptance of the Application does not mean being granted privilege, but only new tasks, which cannot be fulfilled by a government incapable of meeting the pre-application conditions.

Initiative for Monitoring of the European Integration of BiH